From This to This: RAW and Lightroom 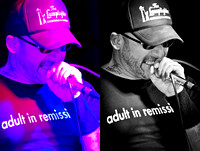 From This to This

I have been a fan of shooting RAW since I bought my first dSLR in 2006, a Nikon D70s. My first two shoots were in JPG, but once I realized the benefits to shooting RAW, I have never turned back.

I normally shoot RAW + JPG Basic. The JPGs serve as the processed proof (if I need to turn something out in a hurry) and RAW I treat as my original negative.  Coming from a film lab for so many years, I can't tell you how many times I've gone back to the the original negative or transparency for printing/scanning, and every once in a while I try something different with paper, contrast, or light balance.  With RAW, I can do this over and over and over without any destructive edits.  And now with storage and cards as inexpensive as they are, we can't use the 'saving space' argument that we've used in the past.

My friends, The GooDBarS were playing at one of my favourite venues in Minneapolis last week, Lee's Liquor Lounge with Krown Vega, and Monster Zero. Lee's just put in some new LED lights a few months ago and they are intense. The crazy thing is that you can have multi-colour lights in the same can. Blue/Red, Yellow/Green, White, Purple/Green, it's crazy. They'll have one can with Blue/Red, and another with Yellow Green. There's no way to plan what's going to happen.  Fortunately, the lights read consistent with the light meter. The lights read out at 1/200th sec at f/2.8 at 2500 ISO, so they are intense, but oh-fer-Christ do they screw with the white balance. Earlier I tried to negate the lights by using a fill flash, but even that was horrid. Checking the image preview, I could see by the histogram that there was detail in the image so I continued to shoot, and hoped that Lightroom would help save the day.

In this photo of GooDBarS lead singer RJ, the image on the left is the RAW file, absolutely no adjustments out of the camera. You can see the that the skin tones are wacked beyond recognition, and the contrast is "Blech", and it's not sharp at all.  The JPG didn't process any better. My Nikon D300s couldn't handle the adjustments in camera. Thank God, for RAW!

Create a New Catalog and then import the RAW images into Adobe Lightroom. As soon as they are imported, I'll make a quick backup on an external hard drive and/or DVD.

Rate the Images I then switch to the Develop module in Lightroom and browse the images, and with the keypad, give them a rating from 1 to 5, 5 being the best.  My first pass through, I'm not very critical in my review. I am looking for images to discard to save time editing, and only publish good quality images. I am also keeping an eye out for 4s and 5s to get a few shots published as quickly as possible. If I get too many images or too many similar images I'll be a little more critical on a second pass.

I'll go to the Filmstrip panel, go to the filters menu and select rated, then select the 5 stars and then 4 and 3 until I get 10-12 good images. These will be the quick publish images to get out within the first 12-24 hours. After which I'll go to 3 stars maybe 2 if I need more images, but if I rate something a 1, I never process it. If it's a 2, I'm getting desperate for images.

Fix the White Balance I rarely trust the 'Auto' function in white balance, instead I use the Eyedropper (as long as there's a white/neutral tone in the image). In RJ's image, I tried the white in his cap, his teeth and his shirt. All three provided vastly different results. I can see magenta and blue in the image so I play with the white balance sliders for 5-7 minutes before I realize that unless I get out the adjustments brush and paint in the white balance on the three separate areas, there's no easy way to do this.  Solution? I'm a huge black and white fan so I head to the Saturation slider and do a quick -100. (Some prefer the Black & White or HSL adjustments but I have a lot of success with Saturation) At first glance, I'm excited that there are enough tones to work with.

Get the Image Sharp A sharp image is important to me, not overly sharpened but naturally sharp.  My default settings for his ISO images are set: Clarity=+18, Sharpening Amount=50, Radius=1.0, Detail=75, Masking=12. Noise Reduction Luminance=50, Detail=25, Contrast=25, Color=50, Detail=25.

In Lightroom, I find that moving the Clarity setting in small increments is key. Zoom in to 100% and move your slider until you get some depth and detail.  You'll feel it.  Then slide to the sharpening tools.  Here's where it gets funky. I'll move the Radius slider first, both to the left and to the right until I see the details. I look for the eyes or teeth as a good indicator. Then I'll use the Detail and Masking to fine tune the sharpness. In the Noise Reduction, I generally leave the Detail sliders set to 25.

Final sharpening set, go to Lens Corrections and click "Enable Profile Corrections".  Lightroom should be able to pick up your lens from EXIF data, another benefit of shooting in RAW.

Fine Tuning the Image We're on the homestretch. Go to the Exposure slider. Now, I know you want to click the Auto button, DON"T DO IT!  Well, OK, if you must but chances are you'll go back to square one. In high contrast images and wacky white balances, it struggles.  Back to the Exposure slider, move the slider until you get detail in the highlights (think Zone System here), in this image, I was going for the teeth and his left hand.  Don't worry if the face or shadow detail are fading out, we can bring them back.

Once you get the highlights where you want them, let's open up the midtones. There are two schools of thought here, one using Fill light/Contrast/Brightness or using the Adjustment brush to paint it in.  I start with the Shadows slider. Your highlights will increase in brightness, but don't worry, keep moving the Shadows slider until the midtones make you smile. If the Shadow adjustment doesn't get you in the ball park, then we have to go to the Adjustment Brush. In this image, I brought the Shadow up to 29 and to bring the highlights back down, I bumped the Highlights down a little bit, and then painted in a -0.5 adjustment on the brightest areas.

Now, I know like this seems like a lot of tweaking for one image, but here's where I get the best of the workflow (and those weird LEDs). From these develop settings, I create a preset in Lightroom. While in the Develop Module, go to the Develop menu, and select New Preset (Ctrl+Shift+N)  Name it something unique and intuitive. Since I shoot at Lee's quite a bit, I named it Lee's LEDs.  Now anything I shoot at Lee's under their funky LEDs I can come to Lightroom and apply the preset, and then slightly tweak the image instead of re-editing each image separately.   In this case, I applied the preset to the rest of the 200 images and in less than an hour, I had the images edited, tweaked and exported out and ready for two final steps.

Photoshop Sharpening and Branding In Adobe Photoshop, I've created an action where I apply sharpening (sometimes Lightroom exports need that little bump) and then apply my brand/watermark.  By creating an action, you can run this individually when you open the image and run the action or in this case, run a batch process. Go to the File Menu, select Automate, Batch, select your action (make sure you have an action with a Save command) Select the Folder where your exports reside and then for Destination, select Save and Close and check the "Override Action "Save As" Commands" so Photoshop will go through the save. While the action is running, you can go mix a drink, hug the kids, walk the dog, etc.

I usually go by the philosophy of "get it right in the camera to reduce your editing later"  In this case, getting the original image in the ballpark(thank you histogram and light meter) and the wonders of Lightroom presets, I was able to get the images sharp, vivid, and published without spending days on the computer. I'm happy, and the bands and their fans were happy.